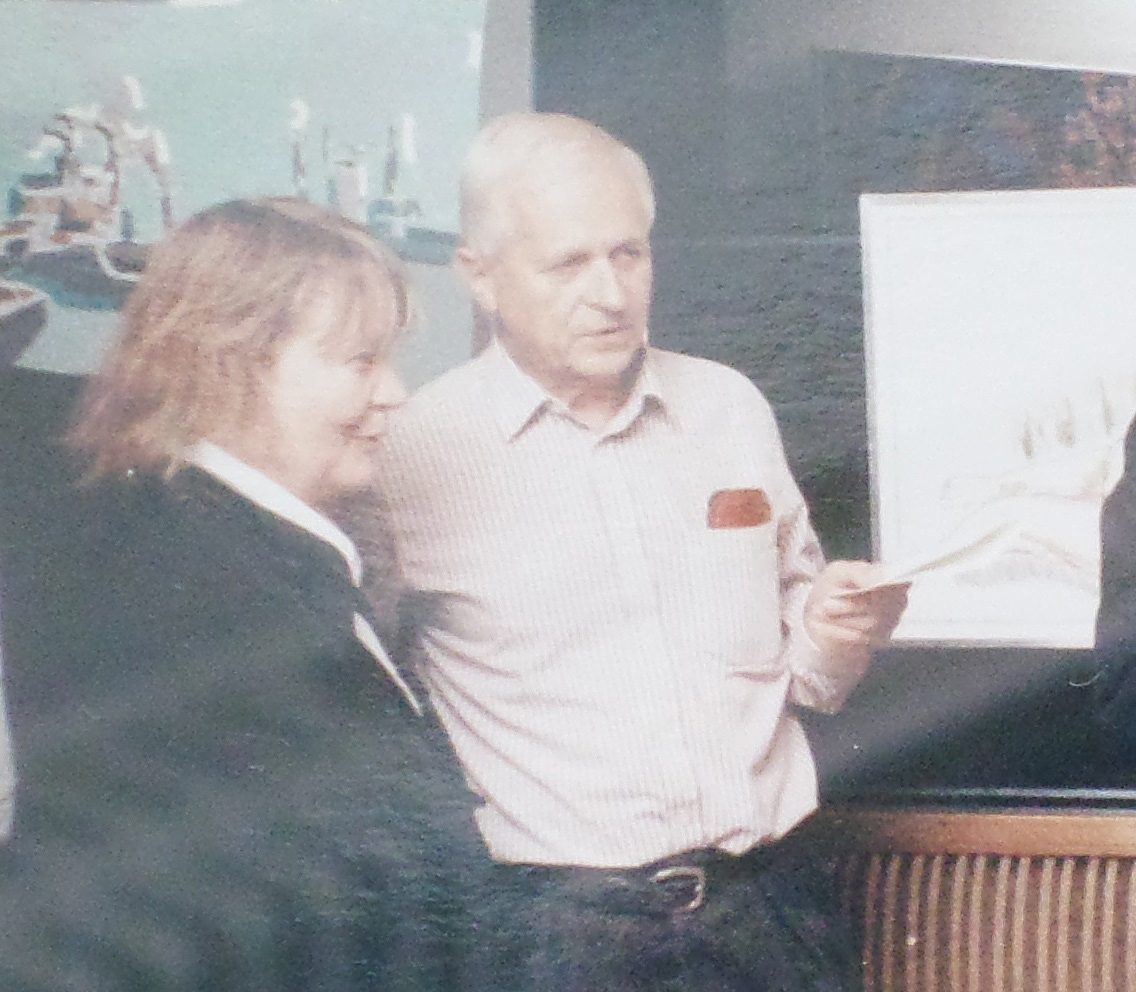 Iris Murdoch met the painter Harry Weinberger (1924-2009) by chance in the mid-1970s and in him she instantly recognised a kindred spirit. For more than two decades, they maintained an intimate friendship and rigorous intellectual discourse, centred on sustained discussion of the practice, teaching and morality of art. It’s my belief that Weinberger had a significant, enduring impact on Murdoch’s vision of reality and her representations of it. Weinberger’s thoughts about art and artists; his aesthetic techniques (notably, his dazzling colour rhetoric); his imagery of rivers, seas, boats, ships, wild landscapes, masks, puppets and religious iconography; and elements of his life, including his early years devastated by the rise of Hitler and his eventual career as an art teacher, all filtered into Murdoch’s mature and late novels. They helped her to communicate meaning more directly and viscerally, render consciousness with greater accuracy, expand the psychology of characters, and increase the moral impact of her writing.

Weinberger was by no means the only artist in Murdoch’s wide social circle. Other artist friends included the engraver Reynolds Stone and his wife Janet Stone, a photographer; the sculptor Rachel Fenner; the painters Alex Colville and Barbara Dorf, and Tom Phillips, who painted Murdoch’s portrait for the National Portrait Gallery. The Stones and the Bayleys formed a four-cornered relationship, each devoted couple complementing the other in intelligence, gentle humour and unworldliness; the Stones’ Dorset home became a much-loved retreat for the Bayleys. Murdoch’s relation to Rachel Fenner had been, initially, that of tutor to student, Murdoch having supervised Fenner’s dissertation at the Royal College of Art in the early 1960s. Murdoch rejected Fenner’s desire for a more intimate relationship but they remained friends, corresponding until the mid-1970s when Fenner’s work and family began increasingly to preoccupy her, and remaining in intermittent contact thereafter. The Bayleys met Alex Colville in Ontario in 1963. Five letters from Murdoch to Colville are known, in which she expresses her admiration for Colville’s paintings and her desire to meet him again, though they were only able to arrange one further meeting when Colville was passing through London. Murdoch and Barbara Dorf met in the early 1960s and maintained an affectionate friendship until Murdoch’s death. Dorf sent Murdoch many gifts, including handmade clothes; they kept in touch by letter and met occasionally. Murdoch and Tom Phillips became friends during the painting of Murdoch’s portrait in 1984-6, their sittings being characterised, as Phillips recalls, by ‘good conversation and many laughs’. They kept in contact, Phillips subsequently producing the designs for the jackets of several of Murdoch’s novels.

So what makes Murdoch’s friendship with Weinberger unique? It was founded on her extraordinary affinity with him, a wealth of shared artistic interests and concerns and Murdoch’s positioning of Weinberger as her tutor in these matters. They shared a common identity in their construction of reality and in their highly innovative attempts to attend to and depict reality by means of aesthetic form. Murdoch pursued him following their first meeting and then went to great lengths to sustain and nourish their friendship, despite her numerous other commitments and frequent admissions of exhaustion in her letters. The scale of Murdoch’s correspondence with Weinberger is unmatched by that which she maintained with any other artist (almost 400 of her letters to him are housed in Kingston University Archive). She resolutely made time to meet with Weinberger, to view and discuss his work, and to visit art galleries and museums with him. Desiring his influence on her perception of art and artists, she constantly encouraged him to give her his views. She was able to converse unreservedly with him, as revealed by her remarks in a letter written following a visit to his house in November 1977: ‘I greatly enjoyed and valued seeing you, and, as you said, there is in a rare sense so little barrier. I feel entirely at home with you. Do please write to me.’ It seems that there was no other artist with whom she could communicate in this way.

I believe Murdoch recognised in Weinberger the practical embodiment of her theoretical ideas. He exemplifies her vision of the truth-seeking artist, probing the nature of reality by means of form, and validating her refutation, in The Fire and the Sun (1977), of Plato’s denigration of the artist as creator and perpetuator of illusion. His outward-directed, prayerful attention to the details of external reality beyond the self is an essential aspect of her neo-theology. Her conception, described in ‘Thinking and Language’ (1951), of thoughts occurring in ‘imaging, semi-sensible mode’ is realised in Weinberger’s attempts to represent the elusive images, colours and forms in his mind’s eye. Their dialogue realises the ideal which Murdoch envisages in ‘The Idea of Perfection’ (1964), being centred on the practice of joint attention to art which enables aesthetic and moral progress and the clearer perception of the other which Murdoch believes to be the true sublime.

We can position Murdoch within a distinguished lineage of writers who construct dialogues with the visual arts, including Jane Austen, George Eliot, Henry James, Sylvia Plath, A.S. Byatt and Zadie Smith. Her discourse with Weinberger means that we can also position her within a succession of fruitful relationships between writers and painters. There are numerous examples of the writer-painter relationship. To name but a few: the Post-Impressionist painter Paul Cézanne was a major influence on the novels of his friend Émile Zola; the aesthetics of Virginia Woolf have recently been reassessed in the light of Woolf’s conversations with her sister, the painter Vanessa Bell, and D. H. Lawrence drew on the paintings and the character of his friend Mark Gertler for Women in Love. James, acknowledged by Murdoch as an important influence on her work and thought, contends that:

James, like Murdoch, had renounced the painterly ambitions of his youth but gained from his friend the painter John La Farge ‘the dawning perception that the arts were after all essentially one and that even with canvas and brush whisked out of my grasp I still needn’t feel disinherited’. Murdoch has a Jamesian vision of an inherent relationship between the arts. She suggests in Metaphysics as a Guide to Morals that:

Any serious pursuit and expression of truth moves toward fundamental questions […] “Truth” is something we recognise in good art when we are led to a juster, clearer, more detailed, more refined understanding. Good art “explains” truth itself, by manifesting deep conceptual connections.

She envisaged good artists as being united by their shared quest for truth. Believing in the interconnectedness of the arts, she felt that concepts, images and techniques could be translated from one medium to another. Critical understanding of how Murdoch draws aesthetic strategies from the visual arts, drama, music and poetry has recently been gaining ground, driven forward by Anne Rowe. Analysis of Murdoch’s discourse with Weinberger can now contribute to this burgeoning area of Murdoch studies.