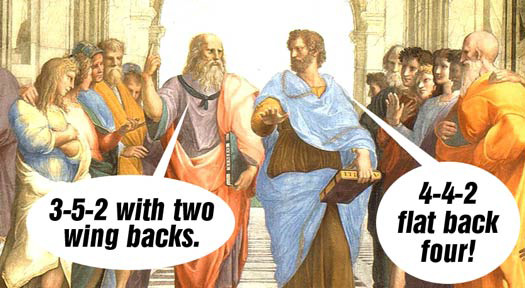 Metaphysics as a Guide to Football

My wife would probably be surprised to hear me say this, but I know that soccer doesn’t matter. Her surprise, I suspect, would be due mainly to the fact that I don’t act like I know that soccer doesn’t matter. We have two young kids, which means that every weekday we get woken up at 6:15 a.m. by two small bundles bouncing up and down on top of our bed. The only chance we get to sleep in is on the weekend, when we put the kids in front of the TV and go back to bed for another precious few hours of rest. This Sunday, however, I didn’t do that. Instead, I set my alarm for 5:55 a.m., jumped out of bed as soon as it went off (having slept badly in the completely unfounded fear that I wouldn’t hear it), and turned on the TV in the living room to watch Chelsea versus Burnley in the English Premier League.

When people who don’t care about soccer try to explain why it leaves them cold, they often say something like “It’s just a bunch of guys kicking a ball around a field.” In the past, this explanation always struck me as missing the point. When I lived in England, one of my favorite parts of going to watch Burnley was the experience of walking to Turf Moor from the parking lot a mile or so away. As we got closer to the stadium, more and more people wearing claret and blue would join us from side streets, like small streams feeding a river as it headed for the sea. As the crowd grew, we turned the corner and saw it: the stadium lit up against the sky, filling up with tens of thousands of people, all there for the same reason we were. Sometimes I would notice someone working in their front yard, watching TV in their living room, or doing something else that made it clear they weren’t going to the game, and I felt genuine pity for them. I felt instinctively that—unlike them—I was doing something that really mattered, and in the crowds around me and the stadium lights ahead of me, I had my proof.

Watching the Premier League at 6 a.m. in my living room during a pandemic, I don’t have the luxury of that kind of certainty. With no fans in the stadium, the seats are covered with banners displaying club symbols and motivational texts (everything from the chest-thumping 'Sean Dyche’s Claret & Blue Army' to the plaintive “We Miss You”) and the TV soundtrack is provided by artificial crowd noise borrowed from a video game. One of the most immediate effects of this—at least for me—is that it forces you to look again at what you’re watching. It literally is just a bunch of guys kicking a ball around a field. One of the teams is going to win, or it will be a draw. Next week, they’ll each play different teams, and next year they’ll do the whole thing again. Either way, it’s hard to figure out why it matters.

In her late work Metaphysics as a Guide to Morals, Iris Murdoch tells a story that she claims is Tibetan in origin:

A mother asks her son, a merchant setting off for the city, to bring her back a religious relic. He forgets her request until he is nearly home again. He picks up a dog’s tooth by the roadside and tells the old lady it is a relic of a saint. She places it in her chapel where it is venerated. It begins miraculously to glow with light.

Murdoch, somewhat cryptically, remarks that the story “may be seen as a version of the Ontological Proof.” Part of what she’s getting at, I think, is that true religious faith excludes all doubt concerning the reality of its object. As she puts it, “God cannot be thought of except as real.” The dog’s tooth only glows because the old lady never considers for a moment the possibility that it might just be a dog’s tooth.

I don’t know whether Murdoch is right about God, but I’m pretty sure that she’d have struggled to understand my reasons for getting up at 6 a.m. to watch soccer. Unlike the old lady in her story, I’m under no illusions. The empty stadiums and canned crowd noise of the pandemic might have brought it home more forcefully, but on some level I’ve always known the game is just a dog’s tooth. The interesting question is why that doesn’t stop it from glowing.

At 8 a.m. on Sunday I turned off the TV. Burnley had lost 2-0, having had no shots on target in the whole game and only one shot of any description at all (in the very last minute when the result was no longer in doubt). This, as my wife would tell you, is how it often goes for Burnley. I commented to my dad back in England, with whom I’d been texting throughout the match, that the team looked tired from two games in four days. It was only later that I found out, on the phone to my mom, that my dad had been suffering from an awful toothache all day. He hadn’t mentioned it, and I hadn’t thought to ask how he was. We hadn’t discussed anything except the game.

In her telling of the Tibetan story, Murdoch focuses most of her attention on the purity of the old lady’s veneration of the dog’s tooth. What she doesn’t really consider is the most obvious explanation for why the old lady never doubts that this small piece of bone is truly the relic of a saint. There’s the purity of her faith, to be sure, but there’s also the fact that—like my unfortunate attachment to one of the perennial underdogs of the English soccer—it was given to her by someone she loved.

This piece was originally published on The Point's Forms of Life blog under the title "Metaphysics as a Guide to Soccer."