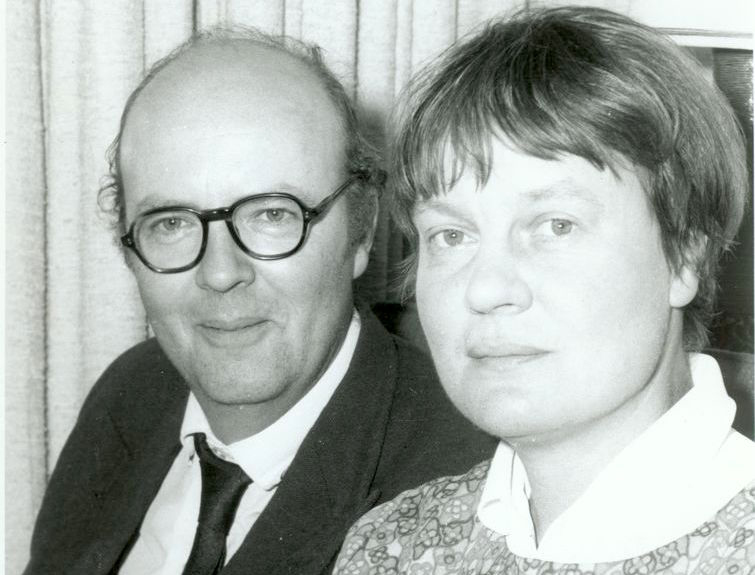 Sorting through some material for my essay on Iris Murdoch’s links with Australia recently, I discovered the notes I took more than a decade ago when, towards the end of a long research trip to the UK, I drove to Oxford from Winchester to meet John and Audi Bayley.

At the time, I was in the early stages of editing (with Graham Nerlich) what would become Never Mind about the Bourgeoisie: The Correspondence between Iris Murdoch and Brian Medlin 1976-1995. We had the text of the letters, but I wanted some more context about the friendship between the two philosophers than Murdoch’s sketchy diary entries from her trip to Australia could provide. John Bayley had very kindly agreed that I could come and ask him some questions.

Audi welcomed me at the door and ushered me in to the house in Charlbury Road that I had heard so much about. It was cheerful and tidy, with no trace of the legendary domestic chaos of Murdoch’s time. I sat across the kitchen table from John, who was clearly not in the best of health but courteous and friendly, and ready to answer any questions I asked about Medlin and about their 1967 visit to Australia.

I suppose I was chiefly seeking confirmation that Iris had a genuine regard for Brian Medlin. She is known as a conscientious and copious correspondent, and many of the letters she wrote to Brian, although always affectionate, seem hastily written. John kindly set my mind at rest: he told me they were very fond of each other, and that was obvious when they met again in Adelaide in 1967. Also, Iris detested writing reviews, so the fact that she wrote a very thorough and thoughtful review of Brian’s 1992 book Human Nature, Human Survival was a tribute to their friendship. He remembered discussing the book with her as she was writing the review, which was published in a much-abridged form in the Age newspaper. The text is included in full in Never Mind about the Bourgeoisie.

John first met Brian Medlin when Brian began his fellowship at New College in 1961. Neither he nor Iris knew him before that. Perhaps Iris was initially drawn to him because of his unusual background as a bushman, drover, horse-breaker and school-teacher. Iris told him, approvingly, that the only background a philosopher should have was as a non-philosopher. John said he saw Brian as akin to some of Iris’s fictional characters, though it is hard to identify any of them who quite fit the mould.

In 1967, the British Council organised for Iris and John to visit Australia and New Zealand. John said that Iris had ‘a passionate love of her Australian experience’, although some of her letters home perhaps contradict that. It was a packed itinerary, and only three days of the six weeks or so they were in the country were spent in Adelaide.

John remembered the day in Adelaide with Brian. They had a picnic, and Brian introduced them to many philosophical friends. They both gave talks at ‘the University’ – I understand it was at Flinders University, where Brian was the newly appointed Professor of Philosophy, although John doesn’t remember that specifically. John said he gave a ‘rather bogus’ talk on Shakespeare, while Iris presented a ‘more serious’ philosophical lecture. John told me that their time in Adelaide with Brian was happier and more successful than anywhere else in Australia.

Another thing John remembers is Brian’s singing. He said it was ‘not tuneful but enthusiastic’. Brian sang ‘Waltzing Matilda’, and also ‘The Ballad of ‘91’:

The price of wool was falling in 1891
The men who owned the acres saw something must be done
‘We will break the Shearers' Union, and show we're masters still
And they'll take the terms we give them, or we'll find the ones who will.

The words of this ballad are in one of Iris’s notebooks in the Kingston University archive, with Brian’s name at the end, dated March 1962. ‘Waltzing Matilda’ is there too, in another notebook. One of the recurring topics of their correspondence is their shared love of singing and memories of singing together in Oxford.

At the end of our conversation John spoke more generally about Iris. He said she regarded herself as divided into several parts – novelist, philosopher, woman of the world. He said she got angry when nobody else took her seriously as a philosopher, and she felt she wasn’t given enough recognition. She didn’t read modern novels, he said, only the classics. But she detested people saying she was influenced by anyone. He said that she was ‘not interested in the past or the future’ – I believe he meant of her novels, though he didn’t specify. He then added that she was influenced by Heidegger, though she didn’t like him.

I drove back to Winchester, where I had been spending a fortnight in the company of Jane Austen’s music manuscript books, and the next day headed to Portsmouth to speak about Matthew Flinders to a gathering of naval historians. But despite all the many excitements of that visit to England, that day in Oxford stands out as particularly special. I never had a chance to meet Iris Murdoch, but I felt so privileged to have met John and Audi Bayley, and to visit the famous house in North Oxford. And it is extraordinary to think that John and Iris had been to my university – long before it was mine, and only one year after it was founded in the bare hills ten miles south of Adelaide.

Gillian Dooley joined Flinders University in 1990 as a librarian, working there until her retirement in 2017. While there, she did a PhD and began a research career which ran in parallel with her professional work for two decades. She is now an Honorary Senior Research Fellow at the university.