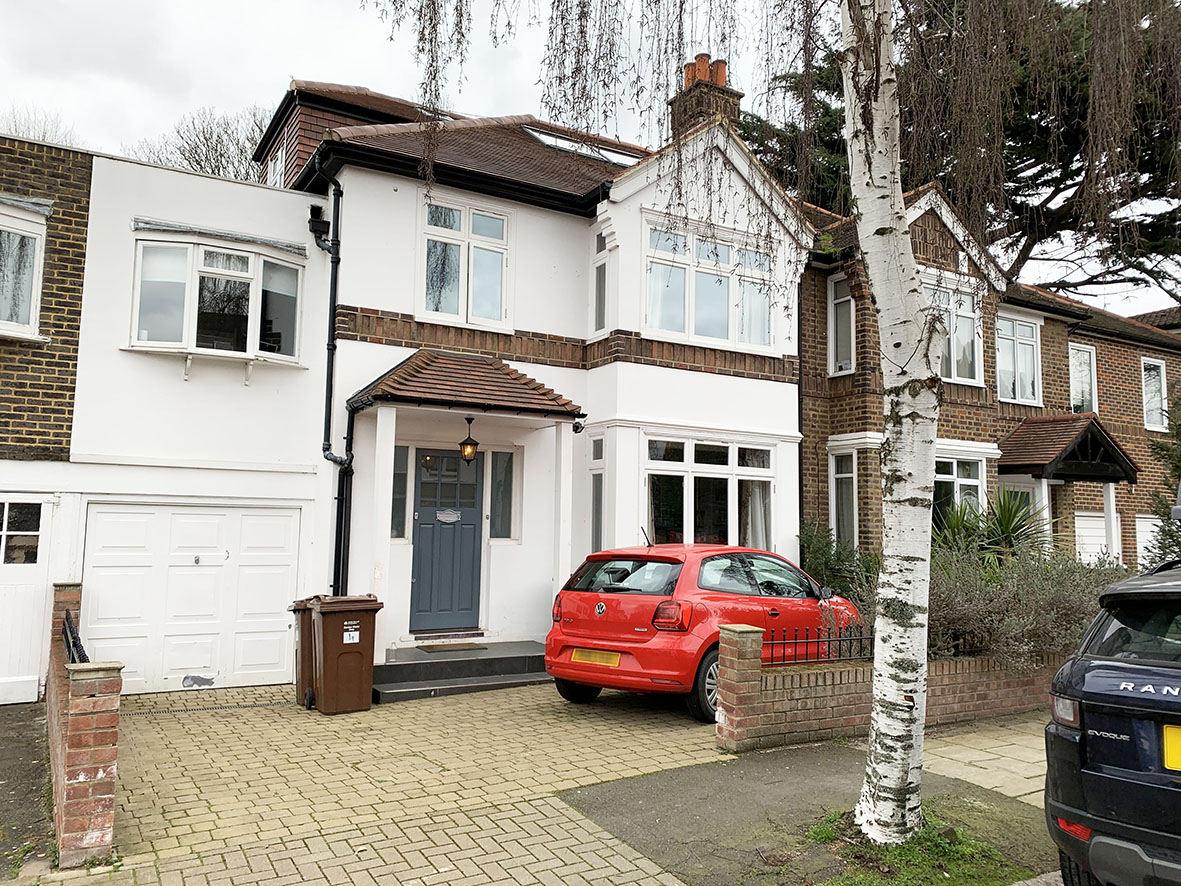 Iris Murdoch, who lived for much of her childhood in Chiswick, was one of the best and most influential writers of the twentieth century. Iris was the only child of doting parents who married after a rather whirlwind romance. Wills John Hughes Murdoch (always known as Hughes) met Irene Richardson (always known as Rene) in the last months of the First World War on a tram in Dublin. Rene (rhymes with teeny) is described by Peter J. Conradi, Murdoch’s biographer, as ‘dark, petite, beautiful and spirited’. She also had a lovely singing voice and was, in fact, training to be a singer. Hughes was captivated, they fell in love and were married in Dublin on 7th December 1918. There was a hint of scandal surrounding their marriage as Iris was born just seven months later in 59, Blessington Street, Dublin on 15th July, 1919. Iris was always proud of her Irish heritage, often referring to herself as an Irish writer. She also reputedly told friends that she lived in Dublin for three or four years as a child. The reality is rather different. Hughes’ work as a second-class clerk in the Ministry of Health necessitated a move to London when Iris was still a baby.

Initially the family lived in a flat at 12, Caithness Road in Hammersmith. Iris’ childhood in London appears to have been a very happy one. Conradi describes her family life as ‘idyllic’, noting that she was ‘both a happy and a docile child’. Hughes and Rene did not have any more children, but this was not a cause for sadness. On the contrary, more children might have been an intrusion. Iris herself claimed that ‘my mother and father and I were always three, and we were always happy’. Certainly, Hughes and Rene were devoted parents, determined to provide everything they could for their daughter. Hughes’ salary was rather meagre; but when Iris was five, they enrolled her into the very good, but quite expensive day school, the Froebel Demonstration School in Colet Gardens. Froebel was a very progressive school for its time, placing enormous focus on creativity, independent thinking and learning through play. During the Great War the school had taken the controversial step of declaring itself pacifist, replacing the standard national anthem with this verse:

God bless our native land
May Heaven’s protective hand
Still guard her shore.
May peace her power extend,
Foe be transformed to friend
And Britain’s might depend
On war no more.

This determination to send Iris to such a school reveals much about the attitudes of Hughes and Rene.

Shortly after this the family moved to Chiswick. In 1926 Hughes took out a mortgage to buy 5, Eastbourne Road, a small, newly built, semi-detached property, ‘tucked away off what was soon to become the Great West Road’. Proximity to the Froebel school would have been a factor. The school was a walkable distance away in good weather or five stops on the District line. Rene would usually take Iris to school; later Hughes would accompany her on the Tube on his way to work. John Fletcher, in an article entitled 'Iris Murdoch, Novelist of London' in 1990, takes a rather sniffy view of the house in Eastbourne Road, describing the house as ‘architecturally undistinguished’, Even worse, he claims that the purchase of such a property betrays ‘a lack of taste’. He doesn’t stop there. Number 4, Fletcher claims, ‘is typical of the millions of semis which spread like a fungus over the landscape between the two world wars’. Huge apologies to the current residents of Eastbourne Road! In reality, a photograph taken just after the Murdochs moved in shows a pleasant, brick-built house with a newly planted chestnut tree on the pavement outside. A photograph taken in the back garden in 1927 depicts a smiling Hughes, Rene and Iris with the family dog. This house was to remain the family home until it was sold in March 1959.

Family life in Chiswick was undoubtedly a happy time. Iris once told a friend from Somerville College that she had been ‘brought up on love’. She appears to have been treated more like an equal than a child. The whole family enjoyed swimming and Iris took frequent walks with her mother in the grounds of nearby Chiswick House. There was a piano in the home and Rene gave her a love of singing; years later Iris would remember fondly the songs her mother had taught her. From her father she gained a love of reading and study. Hughes read widely, often spending his lunch hour browsing second-hand bookshops. Both parents loved reading to Iris and her favourite childhood stories were Alice in Wonderland, Treasure Island, Kidnapped and Kim. There were always family pets, at least one beloved dog and cats called Tabby and Danny-Boy. Iris’ Chiswick childhood indeed seems to have been idyllic, blessed with loving, doting parents who were also determined to develop her intellect and her creativity. Her first imaginative stories can be traced back to the Chiswick days. Iris later said that ‘she began writing stories at nine in order to provide herself with imaginary siblings’. One thing that Iris does not appear to have learned was how to be a good housekeeper! Her mother seems to have had no interest in cleaning, cooking and laundry, tasks often undertaken by Hughes. One relative described Rene, rather harshly, as ‘having sluttish ways’.

Life changed for Iris in 1932 when she was twelve and she started to attend Badminton School near Bristol as a boarder. During the Badminton years Iris grew in independence and confidence, but school holidays always meant a return to the family home in Chiswick along with summers in Ireland. Although effectively she left home when she went to university, Iris came back to the family home off and on until her father died. She also stayed briefly at another house in Chiswick.

Between October 1940 and June 1941, 73 high explosive bombs had landed in Chiswick, one of them within feet of Eastbourne Road, and number 4 had suffered extensive bomb damage. Luckily Iris’ parents were not living there at the time, as Hughes’ job with the Ministry of Health had taken them temporarily to Blackpool. When Iris left Oxford for London in July 1942, as Eastbourne Road was uninhabitable, she lived in nearby Barrowgate Road at number 55. Her stay there appears to have been a short one. Iris had found work at His Majesty’s Treasury, a job which she found less than stimulating, writing in a letter to her Oxford friend Philippa Bosanquet, ‘I can’t believe that it’s me writing those peremptory letters and telling people on the phone where they get off … all I do at present feels like play-acting.’ Her desire to have more interesting employment and travel beyond England was fulfilled when she gained a position with The United Nations Relief and Rehabilitation Administration (UNRAA) in 1944, allowing her to travel extensively in Europe. The thought of spending the post-war years in England had ‘appalled her to the point of suicidal mania’. She longed to have a base in London which was more central and by August 1942 she had moved to a flat in Seaforth Place, just a few hundred yards from Buckingham Palace. This was to remain her London base until she moved to Cambridge in 1947 to study philosophy as a postgraduate student at Newnham College. Iris was never a resident again in Chiswick, but her connection continued, frequently visiting her parents in Eastbourne Road. Visits home became sadder as the years passed. Heavy smoking had taken its toll on Hughes and he was diagnosed with lung cancer just before Christmas in 1956. ‘Sadness hangs over this time’ wrote Iris. Hughes died on the afternoon of Saturday, 1st March 1958 and a year later, the house where Iris had spent her childhood, was sold. Iris took an old teak bench from the garden to her home in Oxford as a memento of her Chiswick childhood.

Miles Leeson, Director of the Iris Murdoch Research Centre at the University of Chichester observes that ‘Iris Murdoch’s childhood in Chiswick formed her as a writer. Her regular walks in and around the area, and more widely around London, helped form the imagination which would go on to produce some of the best works set in London in the 20th century.’ Iris herself described London as a ‘sort of main character’ in her novels. There are numerous references to London throughout her fiction; the following offer a glimpse of some locations which are particularly relevant to Chiswick:

Chiswick: In The Nice and the Good, Eric Sears made his living from a pottery in Chiswick on the corner of Cedar’s Road and Sutton Court Road.

The Old Pack Horse, 434, Chiswick High Road: In Nuns and Soldiers the Pack Horse is a pub frequented by Tim Reede after he leaves Daisy Barrett and Gertrude Openshaw.

The Emperor: The next pub in Tim Reede’s ‘pub crawl’ in Nuns and Soldiers.

The Barley Mow (now called The Lamb, 9, Barley Mow passage) and The Tabard: In Nuns and Soldiers Tim Reede tries to sell his paintings in these pubs.

Chiswick Mall: In Under the Net Chiswick Mall is described as ‘a lazy, hazy collection of houses and greenery that looks dreamily out onto the water’.

There are also frequent references to the river Thames. As a girl in Chiswick Iris lived within a short walk of the Thames and the river is a significant feature in many of her novels. ‘It not only runs through the heart of London, but through the heart of her novels, and the river is celebrated there simply because it is so much loved’, Sacred Space: Beloved City: Iris Murdoch’s London.

Blog post by Jill Apperley – this is an abridged version of a longer article that can be found at https://chiswickcalendar.co.uk/